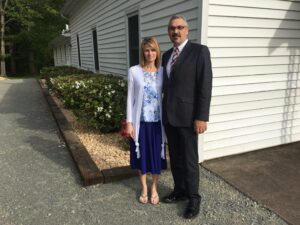 Steven Hoffman was born and raised in Culpeper County. He married his high school sweetheart in 1989 and have been happily married to his wife Donna Hoffman for 33 years.

They have three daughters and six grandchildren.

Stevens Testimony is as follows:

I was a lost church member for eighteen years until May 2011. While volunteering in a church service at the Coffee Wood Correctional State Prison; God used two inmates that couldn’t get into the church service that night because their names weren’t on the Chaplin’s list. The Holy Spirit revealed to me that night that my name was not written in the book of life and I was concerned about my salvation and was under heavy conviction for the first time in my life. Praise the Lord on March 18th 2011 during a church revival I got glorious born again. Shortly after getting saved, the Lord began to deal with my heart about preaching the word of God. In August 2011, I surrendered my life to preach the word of God. I began taking bible classes with the Rock of Ages of Biblical Studies to learn more about the bible and ministry. From 2011 to 2015, I was a faithful student of the bible and was preaching every time an opportunity came my way. I had preached in jails and Nursing Homes and other churches as fill ins. In November 2015 I became the Associate Pastor at Faith Baptist Church in Lignum, Va. under Pastor Tim Akins. In February 2016 I was ordained to be a minister of the Gospel. The Lord began dealing with my heart in early 2020 about stepping out by faith to see what He had for me. I began praying earnestly and seeking God’s for direction and in October of 2020 I stepped out by faith and began filling in for churches that needed a Pastor. In March of 2021 the Church of Griffinsburg Baptist Church asked me to become their Pastor. Through much prayer and mentorship from other godly pastors and preachers that God had used in my life, I finally realized that God had been preparing heart and life for this opportunity. I gladly accepted the position as Pastor of Griffinsburg Baptist Church. Now I am excited to see what the Lord will do through this little country church on the side of the road.